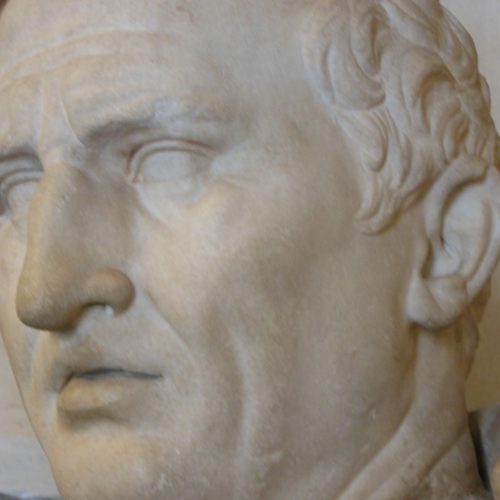 This project is a linguistic investigation of the common ground in Roman political correspondence with a focus on the presentation of new points of view, facts or ideas, especially when presented to addressees with opposing views or interests. In discourse, both formal and informal, participants often ‘negotiate’ about what counts as common ground. They introduce (their view on) events, people and their behavior in order to update the common ground in a way that fits their own interests. The other participants may either accept or (partly) reject the proposed update. In dialogues about conflicting interests it is both argumentatively and socially complex to develop common ground which is accepted by both parties. It is easier to demonize the other and to polarize the debate.

Polarization distances the addressee and his/her supporters from the speaker, but bystanders without a clear opinion from the start are often taken along (Culpeper 2011). Polarizing discourse is, in fact, not a real dialogue, because common ground is deconstructed rather than constructed, and only superficially we find features of a dialogue; the speaker puts forward his or her own opinion only to confirm its correctness for a third discourse participant: the broader audience or bystanders.

Whenever Cicero attaches importance to the relationship with his addressee, despite opposing standpoints, Cicero is skilled in constructing common ground, as well. We find examples of such ground constructing language in his correspondence with friends who either are enemies to other friends of Cicero or who cherish friendships or family ties with Cicero’s enemies. We have, for instance, a correspondence between Metellus and Cicero dated 62 BCE about a public quarrel between Metellus’ brother and Cicero. Cicero’s reply to Metellus’ accusations is full of anchoring mechanisms both in linguistic and rhetorical terms: questions, negations, word order, references to the speaker, addressee and third parties, deictic elements, interactional particles, politeness items, factive verbs, tense usage.
Cicero’s correspondence with Appius around 51 BCE is another example of a social and argumentative challenge to construct common ground; Appius’ brother Clodius, murdered the year before, had been one of Cicero’s fiercest enemies. Moreover, Cicero’s friend and future son-in-law Dolabella accused Appius precisely in this period. Politeness smoothens the discourse between Cicero and Appius, but each letter serves a specific argumentative goal for which it is crucial to develop common ground.

Linguistic investigation of common ground management in Cicero’s political correspondence is expected to yield results relevant both for disciplinary and for interdisciplinary research questions. The main research questions of this project are partly linguistic (1-6) and partly historical-literary (7-8).
1. What anchoring mechanisms do we find when Cicero constructs common ground in his political correspondence?
2. How do these anchoring mechanisms correlate to contextual factors like addressee, formality, previous discourse, etcetera?
3. How do these anchoring mechanisms correlate to categories of potentially problematic common ground (‘facts’, ‘norms’, ‘interpretations’, ‘power relations’, ‘roles’, etc.)?
4. Do we find genre differences in the anchoring mechanisms if we compare epistolography with historiography (less dialogical), speeches (more public) and comedy (more dialogical)?
5. Which anchoring mechanisms in Cicero’s correspondence might be relevant for other languages, other sources, and/or other historical periods (and which are typical for the Latin epistolary corpus)?
6. How does the construction of common ground fit the concept of ‘context’ as described in functional linguistic models, like FDG?
7. How should we interpret Cicero’s letters to political friends in a time of increasing polarization and political uncertainty, viewed from the perspective of common ground management?
8. What can we learn from Cicero’s letters about the impact of civil wars on political relationships in the first century BCE?