From the Sea to the Steppe: Anchoring the Mediterranean through Pastoralist Objectscapes in Central Asia

Home > Projects > From the Sea to the Steppe: Anchoring the Mediterranean through Pastoralist Objectscapes in Central Asia 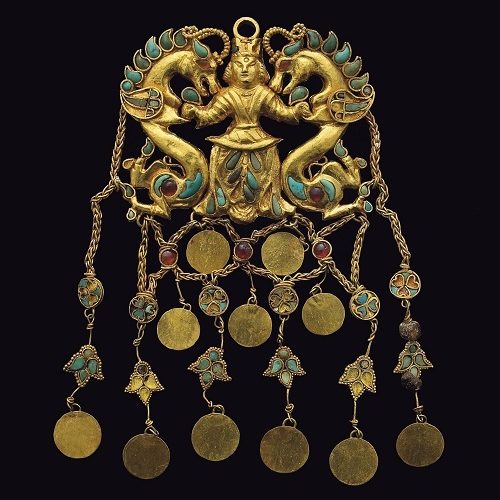 In the study of globalisation in antiquity, the connections between the Eurasian steppe and the Mediterranean have been neglected. Yet, material culture from burial sites throughout the steppe shows myriad connections to many other regions, including the Mediterranean, especially in the 2nd century BCE to 4th century CE. This PhD project examines how this ‘global diversity’ was anchored and embedded through grave goods, creating a novel, relational and local identity for pastoralists in a globalising world.

This PhD-project examines global diversity in the region of Central Asia through the lens of globalisation theory and anchoring innovation, applying the practical framework of the ‘objectscape’ to portable Mediterranean grave goods and local grave goods with Mediterranean aspects from pastoralist burial sites, from three distinct geographical regions (Southeastern Central Asia; Ural mountains, Altai mountains and the Minusinsk Basin; and Southern Siberia and Mongolia). The three regions are strewn alongside the northern expanse of the Silk Routes. Chronologically, the study focuses on the period of the 2nd century BCE to the 4th century CE. This period can be considered the heyday of large-scale, Eurasian exchange networks, in which, among others, the Han Dynasty in China, the Roman Empire along the Mediterranean, the Parthian Empire in Iran and the Xiongnu in Inner Asia contributed and participated in global networks of exchange in which ideas, objects, styles and iconographies traversed great distances and were incorporated within local environments.

With the conquest of the territories of Bactria and Sogdiana by Alexander of Macedon, Central Asia was drawn into a larger, Hellenistic oikomenè, which had a significant impact on the development of artistic style and iconographies in this region and the steppe regions to the north and northeast. However, in this discussion, these Hellenistic styles and iconographies were often either considered to passively ‘spread’ throughout Central Asia, or to have been thrust upon the local population through the artistic taste of the new Greek rulers. Our understanding of the agency of local populations, especially pastoralists, in this process is still sorely lacking. Furthermore, the iconographies and styles found within portable objects from this period are anything but solely Hellenistic. In fact, many of the objects contain a myriad of influences from iconographies ranging from Han China, northern India and the Central Asian steppe. This ‘global diversity’ found within Central Asia is still poorly understood, especially the agency of Central Asians in their choice to incorporate, assimilate and transform numerous iconographies, styles and objects within their society, artistic expression and burial monuments. Each of the portable artefacts from burial sites examined in this PhD-project contains numerous choices made by artisans, communities - and on a larger level, societies - in which certain Mediterranean elements were opted for and adopted into socio-cultural expressions, such as burial assemblages, while other artistic styles or iconographies were not chosen. This PhD-project investigates how these choices function as a form of anchoring innovation, in which pastoralists anchored and embedded ‘global diversity’ within their localised burial sites.