Dress, Gender and Identity in the Northern and Western Provinces of the Roman Empire

Home > Projects > Dress, Gender and Identity in the Northern and Western Provinces of the Roman Empire 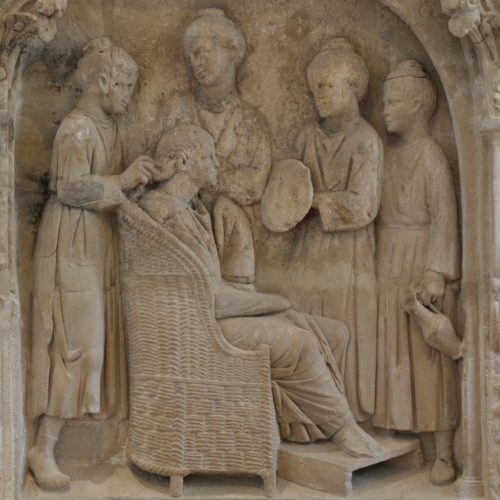 The Roman conquest of the lands of north-western Europe and their subsequent incorporation into the Roman Empire as provinces had a tremendous impact on the lives of their inhabitants. This project investigates how the Roman conquest and Empire affected the representation (particularly the dress) of the people in the provinces. The source material for this study primarily consists of a corpus of funerary monuments with visual representations of the deceased from the provinces of Britannia, Gallia Belgica and Germania Inferior.

The term ‘dress’ incorporates all elements which make up a complete outfit: clothing, hairstyles, jewellery, footwear, accessories, make-up and perfumes. Dress has always been, and still is, appreciated and used for its qualities as a medium of communication. It’s position on the body and many different items and layers make dress capable of expressing complex messages and highly visible and public. Dress functions as a ‘language’ or ‘code’ conveying information about the identity of the wearer to the reader and viewer, visualising their wealth, class, gender, ethnicity, religion and much more. The Roman conquest and Empire brought pre-existing traditional dress styles, ethnic traditions and gender norms in close contact with Roman dress styles, cultural identities and gender norms.

The adoption of Roman dress styles, a continuation of traditional local dress styles or creation of a ‘mixed’ styles are highly meaningful because dress is so intimately connected to a person’s sense and public display of identity. Therefore, understanding such innovations in dress contributes to the understanding cultural and social innovations and processes at work in the provinces. To that end, the focus of this project is to understand the innovations in dress in the provinces in relation to the social and cultural innovations and how people perceived, anchored and represented their ethnic, cultural and gender identity through dress in the changing societies of the Roman provinces.