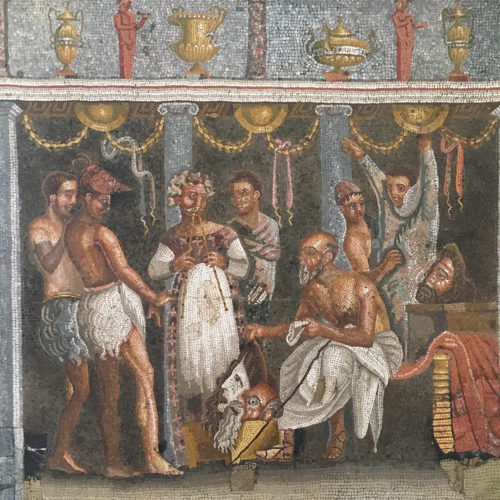 This project investigates common ground management in one of the most popular authors in antiquity: Plautus. Plautine drama famously plays with the boundaries between reality and fiction, constantly breaching the distinction between the performance and the performed. I expect that common ground – the characters’ and spectators’ shared spatiotemporal surroundings, their common cultural values, and their private memories – plays a crucial role in this. By combining a close analysis of linguistic expressions with insights from dramatic theory and cognition, I aim to answer the following questions: In what ways do Plautus’ characters manage (and manipulate!) common ground? How is this related to the distinction between reality and fiction? And what is the effect of this on the audience’s engagement with the performance? The answers to these questions may throw light upon Plautus’ extraordinary ability to entertain a Roman crowd.

Spectators at a dramatic performance attend to two distinct worlds simultaneously: the external, real world of the performance and the internal, fictional world of the characters. Plautine drama is well-known for creating a playful blend of these two worlds. This blending happens on various levels: the performance space blends with the fictional space, actors blend with characters, and Plautus’ Rome blends with the Greek world of his creations. Frequent metatheatrical remarks remind the spectators that they are watching a play, but at the same time the fictional world appears to extend beyond the spatiotemporal limits of the performance, having a “real” existence of its own.

This project investigates the role of common ground management in Plautus’ treatment of the distinction between fiction and reality. It does so by considering the following four distinct but closely related questions.

(iii) Plautine characters frequently appear to compete for the audience’s favor and attention. How do characters use common ground to create rapport with the spectators? How is this tied to the distinction between reality and fiction?

(iv) How does this affect the spectators, and specifically the way in which they are engaged with the performance?