Ideologies of Latin in Fascist Italy (1922-1943): the Language of Rome between Fascism and Catholicism

Home > Projects > Ideologies of Latin in Fascist Italy (1922-1943): the Language of Rome between Fascism and Catholicism 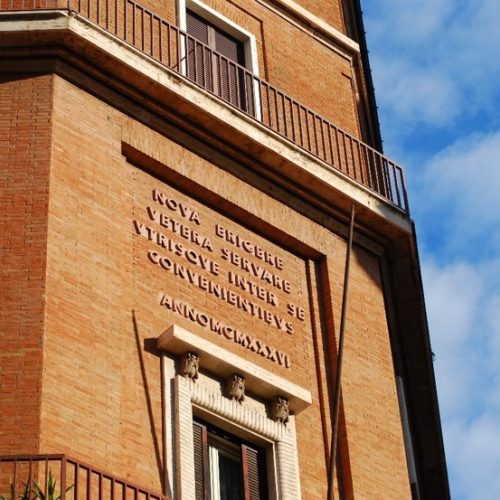 In this project I investigate the role of the Latin language in conciliating Fascist ideology and Catholicism. The Latin language represented a literary, religious, and historical heritage which could both challenge and legitimise the idea that Fascism represented the renewal of ancient Rome in contemporary Italy. When around the late 1920s-early 1930s some ideologues of Italian Fascism started theorising Latin as an important element of the new form of civilization brought about by the Fascist regime, the Roman Catholic Church had been using the language as its medium of communication for many centuries already. The Latin language was then widely perceived not only as the Church’s language, but also as a symbol of its universality, its dogmatic nature, and its privileged relationship to Roman antiquity. The regime’s plans for the implementation of Latin as a specifically Fascist language – which have been documented only very recently – challenged the Church’s monopoly over the language of Rome, and at the same time opened up new possibilities for a synthesis between Fascist and Catholic traditions and values. The aim of this thesis is to study how a variety of individuals – clergymen, schoolteachers, Latinists, and other laymen – used Latin to conceptualize the historical and ideological connections between Fascism and Catholicism.

This thesis draws on a selection of Latin poetry and prose texts written during the ventennio (many of which have been recently brought to the scholarly attention by Han Lamers and Bettina Reitz-Joosse), as well as on articles and essays discussing the relevance of Latin or specific Latin authors (e.g. Vergil) in contemporary Italian society. This research also incorporates archival material that can inform us on individual authors and the motivations behind their Latin works, their intended readerships, and their relationship with cultural and political institutions.