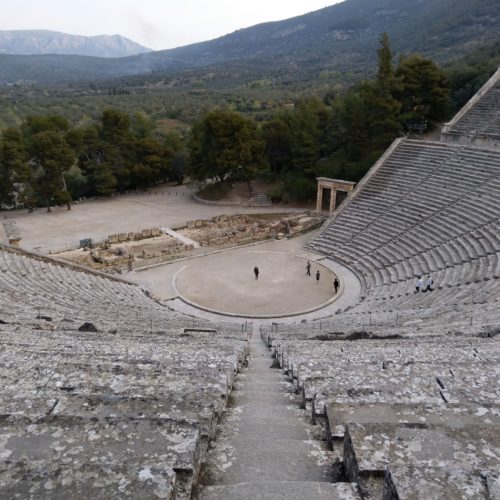 This project is conducted in connection with the NWO-funded project Connecting the Greeks: multi-scalar festivals in the Hellenistic world, directed by Prof. dr. O.M. van Nijf and Dr. C.G. Williamson at the University of Groningen.

At the end of the third century BCE Rome turned her head eastwards. With Carthage no longer a threat, the Romans now declared war on Macedon, claiming to intervene in protection of the freedom of the Greeks. Rome appeared as a major new player in the Eastern Mediterranean, and eventually would manifest herself as the dominant power. A complex and continuous process of cultural communication and status negotiation between the Greek communities and the new hegemonic power – Rome – came about, as both parties had to adapt themselves to the novel situation of Roman rule. It was against this background of rapid change and sudden entanglement that Rome found herself embroiled in the web of cultural and religious traditions that already connected the Hellenic East, and had to develop new ways to adjust and anchor herself to this. At the same time, Greek cities, caught in this context, faced new situations also and had to develop innovative strategies to cope with this conquering power. The developments that where set in motion, form a rich research area for investigating forms of ‘anchoring innovation’ in the ancient world.

Focussing on one of such areas, this PhD project posits that from the very moment that Rome set foot on Greek soil onwards, its hegemony found anchor in the Greek cult and festival traditions that already existed. Exploring ways to respond to Roman power, Greek communities used the familiar language of cult and festivals as a prime venue to draw Rome into their own cultural and religious structures. At the same time, the Roman conquerors - starting with the general Titus Flamininus who famously used the Isthmian games to declare Greek freedom - had to explore various ways to respond to this novel entanglement. What followed was that by the Roman period, the traditional Greek cults and festivals - regularly featuring processions, sacrifices, and athletic and musical performances or contests (agōnes) – became popular as never before. Throughout the Greek world and Roman Asia Minor in particular, old cults and festivals were revived or reorganised, and new ones were founded in large numbers. However, an important innovation occurred, since they were now oriented on Rome and expressed the newly developed entanglements. By investigating these newly developed cults and festivals as a driving force playing a crucial and active role in the anchoring of Roman rule, the central question this project seeks to answer then, is: how did Rome-oriented cults and festivals become anchored in the existing network of Greek cults and festivals, and how did this contribute to the spread of Roman influence and the integration of the Greek world into the Roman Empire?

In this project, the concept of ‘anchoring innovation’ is used as a heuristic tool to investigate the various situations of adopted change (i.e. the different ways that Rome got involved in the existing network of Greek cults and festivals). It provides a tool for understanding the dynamic process of the emergence of a shared cult and festival culture: foregrounding the ‘anchors’ in this process helps to consider in which ways the Greeks accommodated what they perceived as new (innovation i.e. Roman presence) by connecting it to what they already perceived as ‘theirs’ (anchors i.e. the cults and festivals). Moreover, it is expected that anchoring helps not only to focus on the outcome of the innovation (i.e. the successful integration of the Greek world into the Roman Empire), but especially on the building blocks (i.e. the anchors) that enabled this. In addition, this project aims to contribute to a better understanding of how anchoring processes work and hence, a stronger theory of anchoring innovation itself.