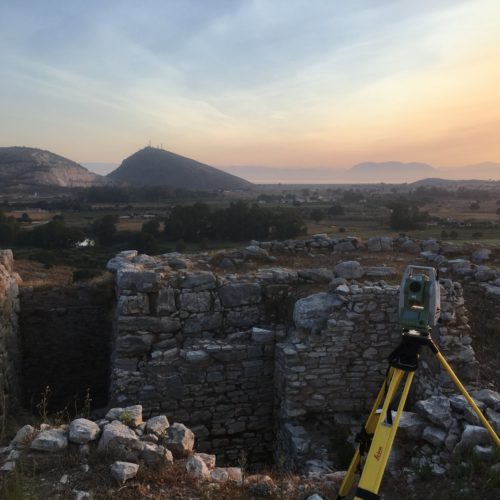 From the early third millennium BC, Early Bronze Age (EBA) farmers and pastoralists created enduring monuments that inspired Late Bronze Age (LBA) builders more than a millennium later. Through empirical study of relative energy expenditure and mimetic design, past inspiration from ruins can be measured. This research will build upon methods put forward in a PhD monograph on Aegean Bronze Age multi-use tombs. The proposed postdoctoral project seeks to answer the following questions:

The project will address these questions through 3D modelling and correspondence analyses. Several 3D modelling techniques, like photogrammetry, offer rapid, relatively inexpensive, and non-invasive methods for architectural survey, building a large database of digital models for public access. Correspondence analyses will help to condense the resulting data, showing which walls most resemble one another in scale, shape, and technique. From there, spatial analyses in ArcGIS will orient ruins into a landscape-scale canvas of inspiration for LBA builders. Combining the spatial data with relative energy expenditure, the proposed project will build a catalogue of walls to reveal regional preferences for mimetic design in Aegean Bronze Age fortifications.

Ultimately this project hopes to advance the role of collective memory as a building guide and walls as empirically testable signals to peers, acknowledging the need for other architectural and ethnographic studies to complete the picture sketched by mimetic design. These issues will reinvigorate discussion over what motivated builders to erect similar monuments separated by a dozen centuries or more across the broken landscape of the Aegean peninsula.