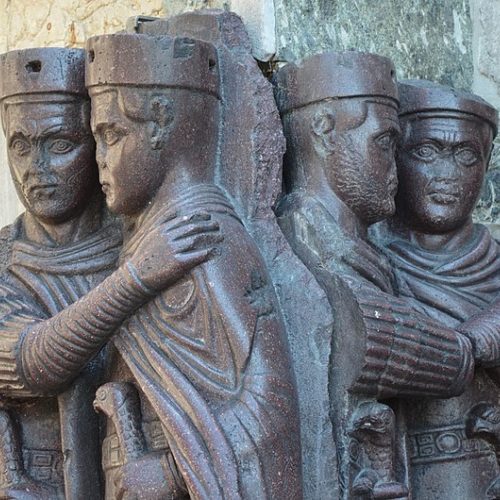 Eumenius got a golden parachute. Raised in an academic family—his grandfather had immigrated from Athens—he had a pension worth six hundred thousand from his job in the imperial bureaucracy. Now Eumenius was going back to his roots, as he announced in a speech celebrating the occasion, and making a gift to renovate the old college building in his hometown of Autun. The whole situation was new, not how these things used to work. Rich donors in college towns like Autun tended to come from landed wealth, not the imperial government, and nowadays they were increasingly reluctant to donate. Eumenius had snagged his plush post, senior director for legislation, because the new group of emperors were rapidly expanding the government and recruiting educated graduates from around the Roman Empire. Eumenius had worked in the newly bustling administrative center in Trier, Germany, and corresponded with colleagues in Syria, Turkey, and Italy who were compiling the Empire’s first legal codes and establishing the new macro-provinces which the government called “Dioceses.” Everything was new, but Eumenius and his colleagues never forgot the culture that produced them. Their speeches are full of literary allusions to the Classical past, the stuff of their college educations, and they link their world to the deeds of famous Greeks and Romans in the past.

My doctoral thesis surveys this process, how Eumenius and his peers explained the changes around them through comparisons with the past. I rely on nine speeches in praise of the emperors in a collection called the Panegyrici Latini, including Eumenius’, from the period between 289-321 A.D., the “New Empire of Diocletian and Constantine.” During these years, as the Roman Empire recovered from a half century of disasters, the emperors rapidly expanded the government, launching an unprecedented amount of economic regulation to fight inflation, reorganizing the justice system, and even changing the Empire’s religion. The bureaucrats’ speeches are full of the vague politeness common at the sort of shindigs where an institution announces a big gift like Eumenius’. Yet amid the dubiously felt congratulations, allusions in the speeches show how the new elite viewed the changes around them and how they felt these changes could be “anchored” in their shared heritage. Today’s world is full of similar change and similar “anchoring;” a new class of digital technicians learns in university buildings renovated to look like mediaeval castles. The speeches of Eumenius’ modern day doppelgangers praise universities deceased founders even as they prepare students for a very different age. The Panegyrici Latini are the best surviving evidence for how this worked at the turn of the fourth century. For Eumenius, it was a world of new opportunities that he reached through his education in the humanities. Perhaps he should have thought about funding a series of Anchoring Innovation grants.