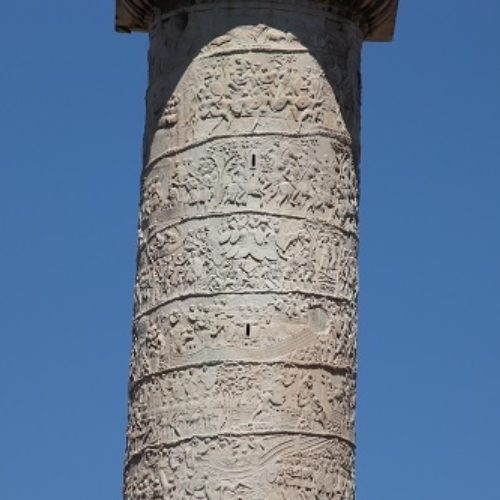 In the year 100 CE, Pliny the Younger (61 – ca. 113) had been appointed a Roman consul and rose from his senatorial seat to deliver his act of thanks or gratiarum actio. This custom in imperial Rome provided the speaker with an opportunity to express their thanks to the reigning emperor – Trajan (emp. 98 – 117), in Pliny’s case. Afterwards, Pliny expanded and published his speech. This version of the speech has stood the test of time and has come into our hands via a collection of panegyrical texts – the XII Panegyrici Latini – from which it derives its current name: the Panegyricus. Pliny’s Panegyricus discusses Trajan’s achievements and character and compares them to those of the Flavian emperor Domitian (emp. 81 – 96).

My project analyses the different traditions to which Pliny anchors his Panegyricus and the way he exploits loci communes to do so. Crucial to this project are the concepts of loci communes – statements that elevate an argument from its specific application to a more general truth with which it should be impossible to disagree – and anchoring innovation – using the various traditions as anchoring grounds and the loci as anchoring devices. The project reviews several traditions to which Pliny anchors his Panegyricus, outlines the ways he does so, and examines the goals behind these anchoring practices. Moreover, it analyses the ways in which loci communes contribute to Pliny’s anchoring and aims to shed light on the question of deliberate anchoring in the ancient world from the perspective of literature. To fulfil these goals, a close-reading analysis of Pliny’s Panegyricus will be employed.

To look at the different loci communes in the Panegyricus and analyse the ways in which they are used as an anchor, I answer several questions for each locus:

Eventually, this systematic analysis of loci will yield valuable conclusions about their use by Pliny and their anchoring role. Such conclusions can shed light on a hypothetical anchoring strategy by Pliny and thus contribute to debates on whether anchoring formed a deliberate practice in the ancient world. Moreover, thorough analysis of the way loci communes are employed to secure Pliny’s text in its rich tradition provides information on the use of loci communes as an anchoring signpost. This project will therefore provide a basis for further research into the use of loci communes and their presence in other anchored texts.