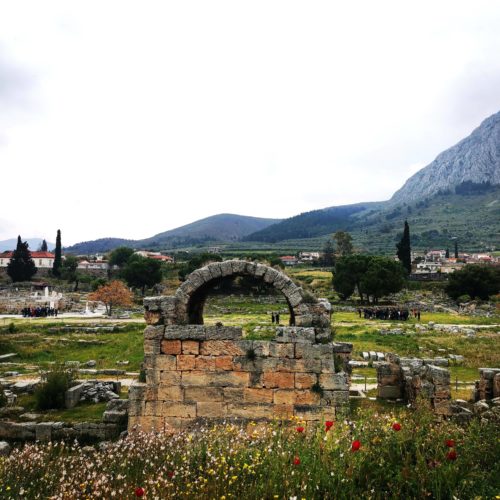 The agora – in its essence a place of gathering – formed a fundamental part of the fabric of all ancient Greek poleis. Often found at the heart of the city, the agora constituted the city’s political, cultural, and administrative centre, while at the same time retaining a strong economic function. The agora can be described as the core centre of civic life. It is a meeting place in the widest sense; the crossroad of nearly all facets of life in a Greek citizen-state. It is the place where political and legal decisions could be made, displayed, and archived, where goods could be sold, where sacrifices and offerings could be made. A place where people could meet, and news could be heard. A communal space where institutions where located and communicative exchanges took place on a daily level. The agora, in many ways, formed the stage where the city’s social, religious, and political identity could be anchored and displayed. Vice versa, changes in society, whether small or big, altered the function, conception, and composition of the agora itself.

Anchoring the agora in archaic and classical Greek poleis

It is the aim of this project to understand precisely how the agora emerged and evolved as a product of societal change and institutional innovation during the archaic and classical period. What kind of institutions were first anchored there? How did political change affect the development of this space? In what ways could economic and religious changes be rooted in the polis through the use of the agora? This project will investigate the creation of the agora in the early Greek poleis, both in physical terms and in its conception. It is clear that the physical make-up of the agora changed along with its ever-developing functions, as did its conceptual meaning in the minds of society. It is this project’s task to analyse this development and to examine how the agora functioned as an anchor for political, cultural, and religious innovation.

Doing so this project makes use of manifold sources; taking into account a wide range of archaeological sources, as well as literary and epigraphic evidence. The archaeological sources provide us with an understanding of the physical development of the agora; its geographical placement, its spatial configuration, and its architectural design. All of which are influenced by change and innovation in society and can be actively altered or added to manifest and anchor new ideas. Alternatively, literary and epigraphical sources are necessary for our understanding of the conception of the agora and its importance as a place where new innovations could be anchored in civic identity and practice. The textual sources are used specifically to analyse the diachronic aspect of conceptual variation. In addition, epigraphical sources are used as they can be analysed both as a textual source and as object. By means of example, inscribed laws are particularly interesting because they show quite literally how change, in the form of a new law, can be planted and anchored both in the very soil as in societal identity by its prominent placement on the agora.

The concept of ‘anchoring’ provides this project with its necessary framework and helps us to better understand how, in the early Greek poleis, innovations could be successfully anchored within society through communal expression on the agora.